Why Scripting Is a Bad Idea for Your Insurance Call Center 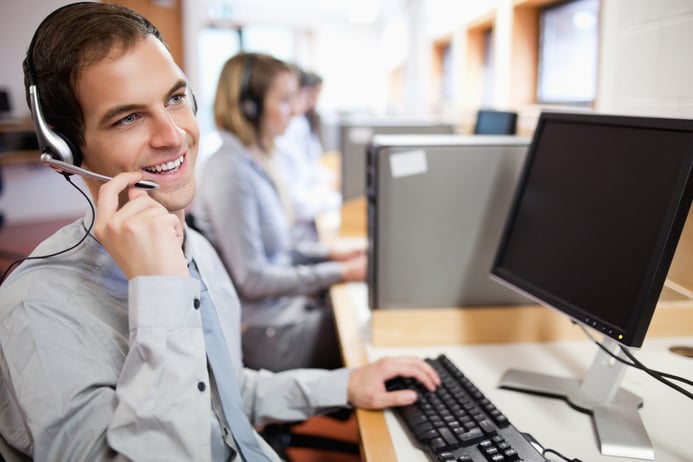 Whether we’re talking about a P&C sales team or any other kind of sales, the goal is always the same – getting your prospects to pick up the phone and listen to your pitch. But even for experienced P&C insurance agents, cold calls can be quite tough. After all, how do you keep people interested in a conversation they didn’t want to have to begin with?

A lot of  experienced sales professionals will tell you that cold call scripts are their most vital insurance sales tools – but the reality is that this is just a status quo that we’ve gotten used to, despite it being largely ineffective.

Most sales staff will tell you that they use a script – but they’ll also say that the number one predictor for their success was, ironically, not sounding like they’re reading from a script.

Considering that – why do sales trainers and phone researchers continue focusing on scripted conversations so much? If the whole point is to be as natural as possible, why are scripts still the industry standard?

The Point of the Script

Unfortunately, sales is still about volume – you win some, but you lose a lot more, especially with cold calls to unqualified leads. If you’re working with a limited number of salespeople who are well-versed in the P&C market, the script seems like the best way to streamline each sales call and perform as many of them as possible within a single day.

However, as understandable as that is – at the end of the day, scripting is just not a good idea if you want to grow a P&C insurance agency. There are plenty of downsides to scripted calls, and we’ll cover some of them right here.

Sure, while sticking to a prewritten script means your insurance agents will convey an accurate, predictable message – ultimately, they’ll convert fewer prospects. If they’re using a script, they can’t form a natural rapport with the target audience; which is absolutely detrimental to the insurance agents’ sales performance.

For instance, what happens when a potential client wants to address something that’s completely off-script – should your agents divert the whole conversation back to the guidelines of the script? If they do that, the prospect will notice and feel like the conversation is just too robotic.

Also, the customer will feel like the agent is more concerned with selling a policy than genuinely helping them; which completely undermines the whole process.

Even within a specific segment of the target audience, your potential clients have different personalities and needs. You can already see how even a universally-written script just won’t do for everyone and every situation. If the agent is working strictly within the space provided by the script, they’ll miss out on a ton of opportunities to actually convert the prospect.

And sure, sometimes agencies solve this by creating diverging scripts that deal with different situations. However, that’s more of a band-aid than a cure – you can’t possibly cover every client’s concern in advance.

So, what can we conclude from the points above?

Well, scripting is only a good idea if your prospect has the script as well – after all, imagine if the dialogues in movies only had lines for one actor, and the other one was completely free to improvise. It just wouldn’t work – and it rarely works in insurance call centers either.

High-quality salespeople can customize their approach to every individual client’s quirks – that’s what separates them from the low-performing salespeople, after all. But they can’t do it properly if they’re forced to rely on a script, especially when clients come in different moods and varieties. And every one of them requires nuance and a different pace.

So, instead of putting so much effort into creating the “ultimate sales script” – your agency should try to train their sales staff to deal with different situations; especially difficult ones. When you give them the social tools and training that allows them to recognize different behaviors and effectively and properly respond – your sales are bound to go up.

Remember, the whole point is to seem natural and unscripted – and unfortunately, it takes a lot more social intelligence, training, and patience; but it’s ultimately worth it.

If you put together more precise client personas, give your agents a couple of important talking points, and train them to fill in the rest of the canvas on their own – you’ll end up with far higher conversion rates.

How to Optimize Your Insurance Agency Website for Lead Conversion

5 Factors to Consider When Choosing an Insurance CRM

Improving Relationships Between Agencies and Carriers